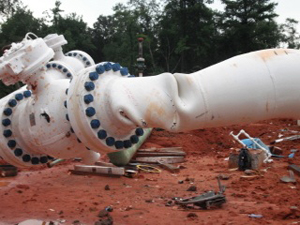 The explosion on Monday was caused by vandalism, Christina Abiakam-Omanu, head of the Nigerian Security and Civil Defense Corps in the southern Bayelsa state in the Delta region revealed.

“The leakage aftermath of the explosion has been contained,” she said on Wednesday, adding a suspect had been arrested.

An Eni spokeswoman said on Thursday the pipeline was in a minor field and flow on the line had been halted for repair work. But she said the incident had a “minimal” impact on production, with the Brass export line still running.

The line transports crude to the Brass oil export terminal, which industry analyst FGE said was expected to export around 90,000 barrels per day (bpd) in February.

There are nine flowstations along a 460-km (290-mile) pipeline that feed the Brass terminal, according to information published by Eni.