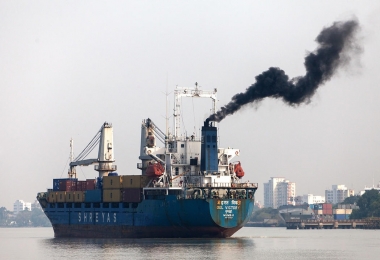 As the International Maritime Organization enters a phase of curbing shipping industry emissions more robustly, the search is on for cleaner alternatives to high sulfur fuel oil to power marine freight worldwide.

The drop in the IMO’s global sulfur limit for shipping from next year is just the beginning, and is expected to drive the majority of shipowners into using new 0.5% sulfur fuel blends when it comes into force. Most have a plan in place to get past the immediate problem of reducing their sulfur emissions next year, but few have fully engaged with the IMO’s longer-term target of halving greenhouse gas output.

“Most people talk about 2020, but decarbonization is by far a bigger target,” Antonis Trakakis, technical director at Arista Shipping, said at an industry event on alternative fuels last month. “The IMO strategy [on greenhouse gases] is a very ambitious target.”

The IMO’s current strategy seeks to halve the shipping industry’s GHG emissions by 2050 from 2008 levels, and to reduce carbon dioxide emissions “per transport work” by at least 40% by 2030. The strategy is due to be revised by 2023, but no concrete measures on how to achieve it have yet been decided.

LNG growth
One emerging trend seen cutting shipping emissions further out is the greater use of LNG as a fuel. LNG is already the fastest-growing segment of the marine fuels industry. Classification society DNV GL estimates a total of 159 LNG fueled vessels are currently in operation, with another 145 on order. S&P Global Platts Analytics forecasts LNG may take up as much as 7% of global bunker demand by 2030, up from about 3% this year. The global bunker market totals about 300 million mt/year of demand.

Using LNG would deliver significant savings in carbon emissions, as well as sulfur and nitrogen, and in conjunction with other fuel efficiency measures could be enough to reach the IMO’s 2030 target. But reaching the 2050 target with LNG is likely to prove impossible, and shipowners contemplating buying a new LNG-fueled vessel with a 25-year lifespan need to think about viability of their investment over that time frame.

LNG bunker advocates have been at pains to describe their preferred technology as a “transition fuel” to help with decarbonization in the short term while the technology is being developed for longer-term solutions.

Carnival has one LNG-powered ship in use and another 10 on order.

“We firmly believe that as a long-term transition fuel LNG leads us into a sustainable future,” Strang added. “It gives us opportunities to look at introducing bio and synthetic fuels in the future.”

Biofuel, ammonia bunkers?
Denmark’s Maersk, the largest shipping company in the world, is looking at biofuels already in its efforts to reduce its carbon footprint. Maersk has set a more ambitious target for itself than that of the IMO, aiming to make “commercially viable” carbon-neutral vessels into service by 2030 and targeting net-zero carbon dioxide emissions by 2050.

Late last month it announced a trial with H&M Group of a shipment powered by a biofuel that it said represents total emissions savings across its production and consumption cycle of 85% versus high sulfur fuel oil. But the company has not said how much it costs, or whether it sees biofuels as a long-term solution.

Some have touted anhydrous ammonia, a high-octane, almost drop-in alternative for bunker fuel, as a possible carbon neutral fuel. But ammonia production is highly energy-intensive, making it much more expensive than other fuels – and it will take time to develop carbon-neutral power generation sources to produce it in the first place, as well as to raise production levels for the bunker industry and develop delivery infrastructure.

Engine manufacturer MAN Energy Solutions has said ammonia is unlikely to be viable within the next decade.

Hydrogen comes into a similar category to ammonia: possibly a solution in future decades once technological problems can be overcome and the necessary infrastructure developed, but unlikely to be used widely any time soon. And batteries and wind rotor technology may be of use in hybrid vessel designs for short-sea shipping, but are not going to make significant inroads into the large container ships and dry bulk carriers that make up the majority of global bunker demand.

In the meantime the IMO’s 2030 deadline is approaching steadily, and fuel-efficiency measures like slow steaming will not be enough on their own to deliver its target. Shipowners may find themselves returning to interim solutions like LNG if carbon-neutral solutions like ammonia continue to look technologically unfeasible for now.

“At this point in time you could say LNG is the most mature solution,” George Plevrakis, gas fuel sector manager at the American Bureau of Shipping, said last month. “It doesn’t solve the riddle of 2050, but it’s an improvement and it’s technically ready.”
Source:
Platts

Kyari and the Burden of Broken Promises