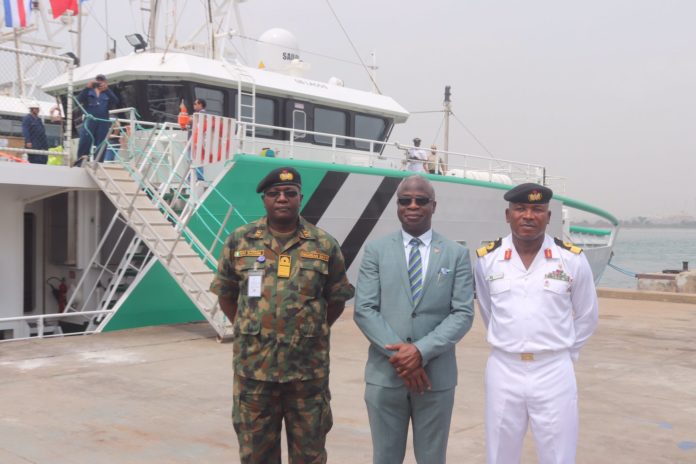 Fresh impetus had been injected into Nigeria’s bid to upgrade its maritime security architecture with the acquisition of two Special Mission Vessels (SMV) as part of the Deep Blue Project aimed at tackling insecurity within its waters and the Gulf of Guinea.

Speaking at the unveiling, Director General, Nigerian Maritime Administration and Safety Agency (NIMASA), Dakuku Peterside said the new security assets will lead to a decline of criminal activities in the maritime sector.

Dakuku who was represented by the, Executive Director Operations, NIMASA, Engr. Rotimi Fasakin, said “Oil thieves, sea robbers and pirates have caused huge embarrassment to the nation. However, we are determined to change the narrative and restore tranquility in the coastal regions.”

He revealed that the vessels will be deployed on the water bodies once all other assets arrive the nation and necessary logistics are in place.

“In the entire deployment we are going to have seventeen fast intervention vessels, two special purpose helicopters and an unmanned Aerial Vehicle (UAV). We are putting together necessary equipment before commencing operations,” he revealed.

In addition, Fasakin disclosed that the DB Abuja and DB Lagos, which are built to be intelligently operated, will also serve as mother vessels to Fast Intervention crafts that are able to respond to distress calls swiftly. Each of the interceptor boats has a combined engine capacity of 900HP and can do up to 55knots. He also said that each of the vessels would be commanded by a Navy captain with full complement of naval personnel.

It would be recalled that the Federal Executive Council (FEC) granted approval for a holistic maritime security architecture, which is a multi-pronged approach towards fighting piracy. Aside the sea assets, there are also land and air assets, which are still expected in the country before the end of the year.
Fasakin also said that “The time is right to battle insecurity on the waters and with the sophisticated arms we have seen fitted on these vessels, I make bold to say that Nigeria is ready to combat criminality in her maritime domain and beyond.”

He reiterated the Federal Government’s committed to obliterate criminal activities along it’s coast.

Also speaking at the occasion, the Chief of Naval Staff, Vice Admiral Ibok-Ete Ekwe Ibas, represented by the Chief Staff Officer, Western Command, Rear Admiral M.M. Bashir expressed his delighted in seeing the vessels in Nigeria.
Bashir mentioned that this feat was achievable because of the seamless collaboration between the Nigerian Navy and NIMASA.

He stated that the vessels will add value to the existing maritime security architecture, and called on all related agencies and stakeholders in the maritime sector to collaborate to solve problems ravaging the industry. “We have realized that it is in the best interest of the maritime agencies and stakeholders to pool their resources so that we don’t duplicate efforts”, he added.

In addition he cleared the air on ownership of the vessels and the role of the Navy in this new development. He said, “The vessels belong to NIMASA and the role of the Navy is to provide experienced personnel that will man the assets.”
Bashir also noted that the Nigerian Navy is putting in necessary modules to address insecurity in the maritime domain. He said “The Navy is recapitalizing its fleet which include surface vessels, air assets and a combination of all these equipment will aggregate to better security.”

Recall that, during the Minister’s press conference earlier in the year on maritime security, he said that the Federal Government is determined to end mischievous operations in the coastal region and assured that the first phase of maritime assets will arrive in the country by the end of February.

The Integrated Security and Waterways Protection Infrastructure, otherwise known as the Deep Blue Project, is a multipronged approach towards tackling insecurity in Nigeria’s territorial waters and the entire Gulf of Guinea. It will be complemented by acquisition of assets, such as fast intervention vessels and surveillance aircraft. NIMASA also operates a Command and Control Centre at the Regional Maritime Resource Coordination Centre (RMRCC), which is also part of the Deep Blue Project.