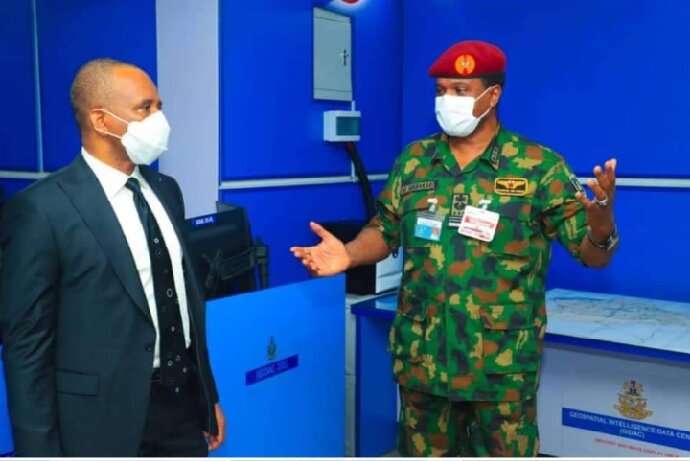 The Nigerian Maritime Administration and Safety Agency (NIMASA) and the Nigerian Air Force are set to deploy assets acquired under the Deep Blue Project, also called the Integrated National Security and Waterways Protection Infrastructure, in support of the Federal Government’s maritime security effort.

The Chief of Air Staff, Air Marshal Sadique Abubakar, announced this when the Director-General of NIMASA, Dr. Bashir Jamoh, paid a working visit to the Nigerian Air Force headquarters in Abuja.

The NIMASA DG had requested adequate arrangement to receive and deploy the two special mission aircraft expected in the country in the next few months.

While commending the leadership of the Nigerian Air Force for its commitment to capacity development, Dr. Jamoh noted that NIMASA was committed to ensuring the success of the Deep Blue Project with adequate cooperation from all stakeholders.

He stated, “We have received two Unmanned Aerial Vehicles (UAV), and the two special mission aircraft are expected to arrive Nigeria before the end of the year. The challenges associated with the COVID-19 pandemic delayed the special training for the personnel to man these air assets, but we have found a way around it. We will continue to seek your partnership to secure the Nigerian maritime domain.”

Dr. Jamoh disclosed that 17 fast interceptor boats, 15 armoured vehicles, and two special mission vessels were some of the land and marine assets already on the ground. He said all hands must be on deck to secure the country’s maritime environment and change all negative narratives.

Responding, Air Marshal Abubakar said the NAF had maintained a longstanding cordial relationship with NIMASA, with an MOU on Maritime Air Surveillance and Intelligence signed in 2013. He said, though, the MOU had elapsed, the NAF had continued to play a crucial role in maritime security, working closely with the Nigerian Navy, and NIMASA.

Air Marshal Abubakar disclosed that NAF had recently established a Combat Reconnaissance Group (203 CRG) in Gombe State, primarily, to deal with the security challenges in the North-East and other parts of the North. He said the drones that would be deployed with the 203 CRG could be moved to any part of the country, including coastal locations, especially given the crucial place of the maritime environment to the survival of the country.

“Indeed, we are working towards establishing UAV wings in Lagos, Calabar, and Port Harcourt to support other security agencies in maintaining the security of the maritime environment,” he stated.

Abubakar assured the DG that Air Force would do everything in its power to partner with NIMASA on the Deep Blue Project, saying the Federal Government is doing everything humanly possible to secure Nigeria and Nigerians.

The Deep Blue Project, also called the Integrated National Security and Waterways Protection Infrastructure, is a maritime security project, which aims to comprehensively tackle insecurity in Nigeria’s territorial waters and Exclusive Economic Zone, up to the Gulf of Guinea.