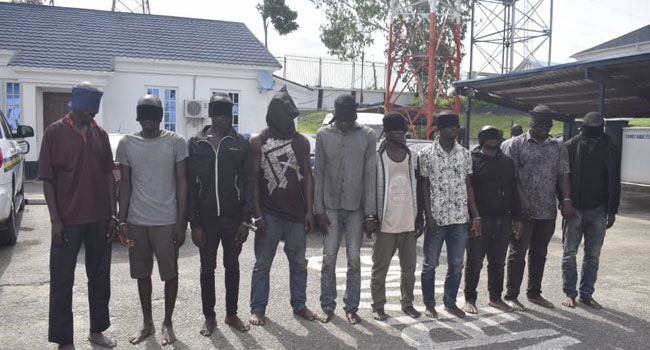 The Federal High Court in Port Harcourt has made the first convictions under a new anti-piracy law, giving hope to the world’s shipping fleets that legal reforms will help stem rising attacks in the Gulf of Guinea.

Delivering judgement, Justice Mohammed Sani summarily convicted Binaebi Johnson, Daniel Lemmar and Ghane Gordon on Counts 1 and 2 and they were ordered to pay a fine of N20 million each under the new Antipiracy Act 2019.

The three men fined by the court on Tuesday were among nine accused of hijacking the tanker MV Elobey VI off Equatorial Guinea in March and securing a $200,000 ransom for the crew.

The merchant shipping industry has since put pressure on Nigeria to take action in the area, which has been dubbed “pirate alley.”

It accounts for over 90 per cent of maritime kidnappings globally, according to the International Maritime Bureau (IMB), with attacks on everything from oil platforms to fishing vessels.

In a statement signed by Phillip Kyanet, Head of Corporate Communications, Nigerian Maritime Administration and Safety Agency (NIMASA), the Director-General of the Agency, Dr. Bashir Jamoh, described the conviction as a signal that Nigeria is in the right path in the war against piracy and other crimes on the nation’s waterways.

Jamoh said NIMASA as an interested party will continue to work closely with other agencies of government, the international community, and other stakeholders to achieve improved security in the Gulf of Guinea.

The Director-General stated, “This will serve as a deterrent to other criminal elements who are still engaged in the nefarious activities on our waterways. On our part as an agency, we will not relent on our efforts to ensure a safe and secure maritime domain in line with our mandate.

“The Suppression of Piracy and Other Maritime Crimes (SPOMO) Act 2019 has come to stay and it is victory for Nigeria as a whole as we are determined more than ever before to take our rightful place in the comity of maritime nations.”

The prosecution counsel, Labaran Magaji, who spoke to newsmen outside the court, said the judgement was a landmark victory for the antipiracy law.

“They were charged under Section 16 (4) of the antipiracy law and once the charge was read to them, they pleaded guilty and the prosecution actually applied to the court to summarily convict them to pay a fine of N20 million each and only three of the defendants were actually sentenced,” Magaji said.

The remaining six pleaded not guilty and their trial continues.

Nigerian navy spokesman, Commodore Suleiman Dahun said the convictions were the first conviction under the law, passed last year to make it easier to prosecute pirates. He said the fines were levied in lieu of prison sentences.

While the Gulf of Guinea spans more than a dozen West African countries, experts say the pirates typically come from Nigeria’s oil-rich but poverty-stricken Delta region.

A total of 49 crew were kidnapped in the Gulf in the first half of this year, compared with 27 last year, according to IMB figures. It said attackers were also going further out to sea.

“We need to change the risk-to-reward ratio…,” IMB Director Michael Howlett said last month. “Without an appropriate and proportionate deterrent, pirates and robbers will get more ruthless and more ambitious.”