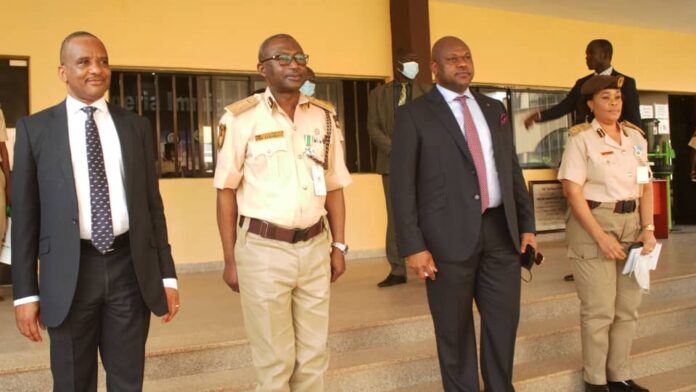 In a bid to ensure synergy in the security of Nigeria’s maritime domain, Director-General of the Nigerian Maritime Administration and Safety Agency (NIMASA), Dr. Bashir Jamoh, has visited Comptroller-General of the Nigeria Immigration Service (NIS), Muhammed Babandede, in Abuja, with a declaration that teamwork was the surest means to security.

Jamoh, who was at the NIS headquarters on a working visit, said the immigration service was a critical stakeholder in the security apparatus of the country. He said the service was also key in the implementation of the Cabotage law, which seeks to empower Nigerians in the maritime sector.

The Director-General stated, “We need to interface and synergise to achieve our common goal of national security. Immigration is key to the success of the country’s maritime imperatives in many ways.

“Many of the criminal activities that take place in our waters emanate from land, and NIS is a very important element in any effort to nip such crimes in the bud.”

Jamoh added, “Collaboration with the NIS is crucial in the achievement of the objectives of the Cabotage Act. Such partnership will go a long way in reducing inter-agency conflicts that often arise from the overlap of functions.

“There are provisions in the immigration law, for instance, that empower the NIS to grant work permits to expatriates, and some of these expatriates work as seafarers. But, then, according to one of the four legs of the Cabotage regime, expatriates are not meant to man our ships, except where their expertise is needed for such operation. And their services can only be engaged after a waiver has been granted by the exclusive permission of the Minister of Transportation.

“To avoid any conflicts that may arise from a situation, where, for instance, a seafarer had obtained a work permit from the immigration but is not qualified to function as a seafarer within the Nigerian maritime domain, collaboration between NIMASA and NIS is necessary. This will help to harmonise the seemingly overlapping laws and forestall unnecessary rancour or squabbling among officers of the two agencies.”

“So far, we have recorded tremendous successes in our various mandates through such collaboration,” he said. “One of the most notable is the recent arrest of suspected pirates, which was made possible by information and intelligence sharing.”

Responding, Babandede expressed the readiness of the NIS to partner with NIMASA to curb illegal migration and piracy. He disclosed that NIS had started making use of the Migration Information and Data Analysis System (MIDAS), a comprehensive border management information system developed by the International Organisation for Migration (IOM). The Comptroller-General said MIDAS was designed with the capability to collect, process, store, and analyse traveller information, especially the biometrics and profile, in real time for the purpose of identification, verification, and authentication of documents.

He said MIDAS had been installed in about 24 locations across the country’s land borders, airports, and seaports. They include the International airports in Abuja, Enugu, Lagos, and Kano; and land borders in Ogun, Cross River, Kastina, Jigawa, Kebbi, and Zamfara states.