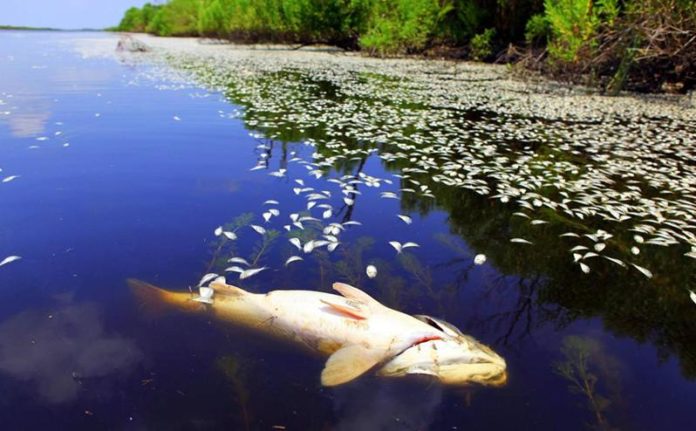 Nigeria’s oil-spill response agency said thousands of dead fish that recently washed up on its Atlantic shores were probably killed by pollution from heavy metals.

Samples of the fish and nearby waters analyzed in a laboratory showed normal levels of hydrocarbon and unusually high amounts of metals traceable to waste from batteries and other industrial effluents discharged into waterways, Idris Musa, director-general of the National Oil Spill Detection and Response Agency, said in a statement on its website.

“The findings did not show hydrocarbons as the possible cause of the deaths,” Musa said in reference to the region’s onshore and offshore oilfields. “However, there were some heavy metals such as cadmium, chromium, copper, zinc and iron that exceeded regulatory standard limits.”

Nigeria, Africa’s biggest oil producer, pumps almost all of its crude from the adjoining Niger River delta region in the Gulf of Guinea.

Recall that NOSDRA, in reacting to reports of the sudden appearance of dead fishes along the Niger Delta coastline states of Akwa Ibom, Bayelsa, Cross River, Delta, and Rivers, and other places within the region, recently carried out reconnaissance of the areas and according to its Director General, Idris Musa, “There was no incidence of oil spill within the area which made it expedient to look beyond oil spillage as the likely cause of the deaths in such large numbers.”

Subsequently, a coalition of government agencies comprising the Nigerian Maritime Administration and Safety Agency (NIMASA), Nigerian Institute of Oceanography and Marine Research (NIOMR) and the National Environmental Standards and Regulations Enforcement Agency (NESREA), commenced a scientific inquiry to identify the cause of the incident.